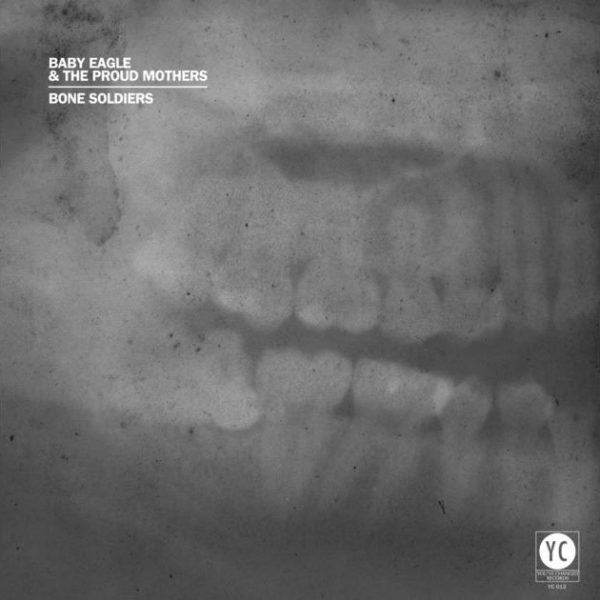 “I dealt myself the winning hand: the lizard and the bleating goat, the eight of bones. But if I could choose the type of beast that I would most happy be, I’d be a man, my love, short, fat, and strong.” – Hurricane Weather

If there were such a position to be held, Steven Lambke would be the rock and roll poet laureate.  Putting in ten years as a guitarist and vocalist in The Constantines, releasing three, now four records as Baby Eagle, and co-founding scrappy independent label You’ve Changed Records (Daniel Romano, Shotgun Jimmie, The Weather Station), Lambke’s output has been ceaseless.  No wonder that Bone Soldiers, his fourth record as Baby Eagle, abounds with military metaphor.  It is the work of a veteran.  Loud, brief, and incendiary, it’s both a return to his punk roots and a continuation of his increasingly sophisticated work with lyrics.  As with the critically acclaimed Dog Weather, the record is a perfectly interconnected narrative.   Lines that casually mix thorny questions of purpose and meaning with rich imagery and seemingly minor incident.  Gorgeously bent guitar solos face up to Lambke as grinning narrator, wheezing, shouting, and whispering his way through a rich stew of rhythmic precision and pop decadence.

Decamping to Toronto’s vaunted 6 Nassau with Constantines producer Jeff McMurrich at the helm, Lambke enlisted an all star team of friends and bandmates to be his Proud Mothers; Will Kidman (The Constantines), Ian Kehoe and Spencer Burton (both of Attack in Black), and Nick Ferrio (of his Feelings).  They recorded the whole thing live off the floor in a couple days at the tail end of a long tour.  The band sounds determined, bound in lockstep by time and meter yet taking every opportunity to slip out the sides, falling over into freewheeling solos, simple melodies with a few notes out of place, like a square that’s been hit by a hammer.  At times gentle, at times joyfully deranged, the disc never fails to be vivid, as Lambke talks duty, dischord, and tangled connection.  ‘We know love is a mongrel thing; a mix of chance and cross spirits’, he shouts in the pop laced Marching Orders.  By the last song, the crackling Hurricane Weather, we can hear the accumulated hum of four amps, brothers and bandmates standing in a room, listening to a final note of feedback oscillating and wobbling to its foreshortened conclusion.