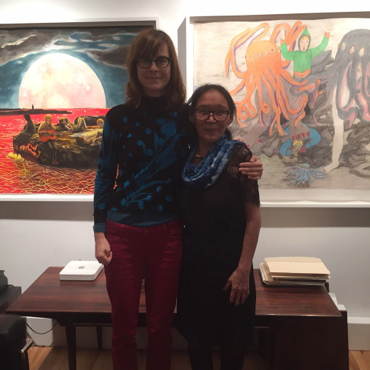 Shuvinai Ashoona was born in 1961 in Cape Dorset, Nunavut to a family of celebrated artists. Her father Kiawak Ashoona was a sculptor, her mother Sorosilooto Ashoona was a graphic-artist, and her grandmother Pitseolak Ashoona was one of the most acclaimed Inuit artists of her generation. Shuvinai Ashoona began drawing in 1995, creating images that reflect her community environment, as well as the unique and personal realm of her imagination. Represented in numerous group and solo exhibitions in Canada, her drawings have been included in several international exhibitions, such as Basel, Switzerland’s City Sky(2008), the Sydney Biennale (2012), and Oh, Canada at the Massachusetts Museum of Contemporary Art (2012). Ashoona is the subject of Marcia Connolly’s documentary art film, Ghost Noise (2010), and her work can be found in the Phaidon publication Vitamin D2, New Perspectives in Drawing (2013). Shuvinai Ashoona is represented by Fehely Fine Arts, Toronto.

Shary Boyle was born in 1972 in Scarborough, Ontario. Since graduating from the Ontario College of Art in 1994, she has worked in ceramics, sculpture, painting, installation and drawing. Boyle alternates a solitary studio practice with collaborative creation and touring of sound/art performance projects. Her work is exhibited, published and collected internationally. Shary Boyle is the recipient of the Gershon Iskowitz Prize (2009) and the Hnatyshyn Foundation Award (2010), and represented Canada with her project Music for Silence at the 55th Venice Biennale in 2013. In 2015, Boyle was commissioned to create a sculpture in response to the Inuit Art collection at the Musée des beaux-arts de Montréal, and presented a collaborative audio-visual performance Spell To Bring Lost Creatures Home with musician Christine Fellows on a 15-date tour from the western arctic to Newfoundland.